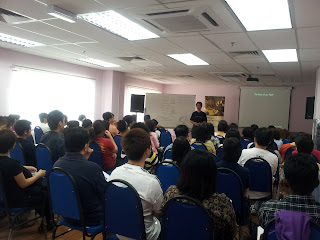 We had 54 participants representing various churches in KL and PJ plus also one who flew in all the way from Kuching. The focus of this 1-day Creation Apologetics training is in line with our mission to "equip Christian parents and teachers on Creation Apolgetics so that they can in turn train the next generation to stand upon Biblical truth and be an effective disciple of our Lord Jesus Christ." See our website. 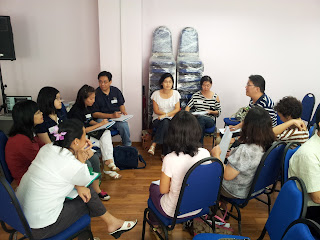 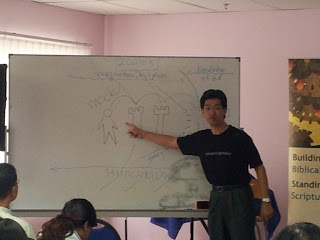 Unlike the short seminars conducted thus far, we had a more time in this 1-day program to cover the teaching aspect of Creation Apologetics. 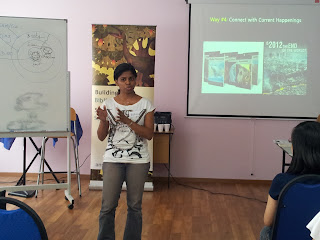 We were so encouraged by the impromptu testimony from a Masters student who shared with us on the importance to make a stand in the academic world and how this eventually strengthen her testimony to her friends. When we have firm views on the accuracy of Scripture beginning from Genesis, we become more salty and our light shines brighter!
Posted by Joseph Tan at 6:47 PM No comments: 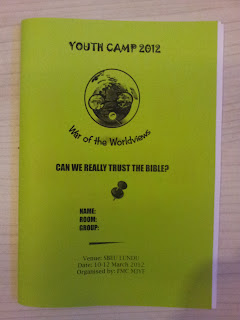 "War of the worldviews - Can we really trust the Bible?" - that's the theme for the Youth Camp of Faith Methodist Church, Kuching. This is the first time we are privileged to conduct a Youth Camp for close to 50 young people - all eager to know more about matters of origins, science and history! 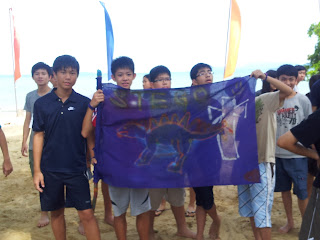 The teams were divided into dinosaur groups! In my conversation with a 13-year old student, he said the teaching session on dinosaurs was the one that impacted him the most. Almost everyone in the camp have books on dinosaurs at home but not many know the subtle impact of the millions of years myth. 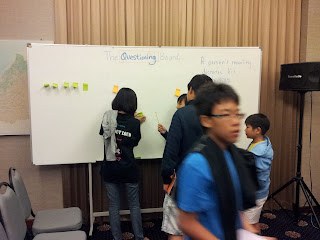 This is the "Questioning Board" where a steady stream of "post-it" questions came from the "truth-hungry" youngsters! Popular questions asked were on Adam & Eve, aliens, dating methods, dinosaurs, evolution and even theological questions about what heaven and hell. I have never had such an inquisitive crowd before! 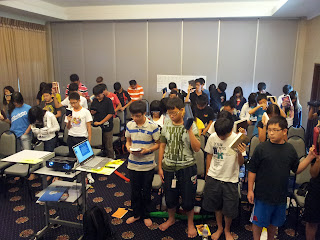 That's the group holding up the Bible to make a commitment to share the truth of creation to at least one friend. The one message that came strong was that we need to use Scripture as the "filter" by which to make sense of the world around us. 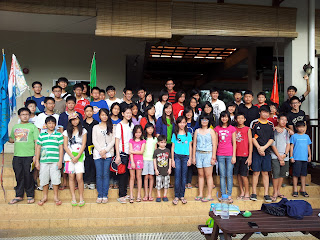 The Faith Methodist Church generation of the future who will stand upon the authority of Scripture - starting from the very first verse! 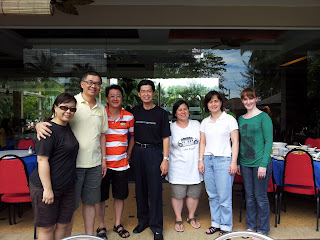 Many thanks to the team of Advisors who worked very hard behind the scene in putting this whole camp together. Really appreciate the hospitality of Meng Hung and his wife Eunice - really felt very much at home in Kuching! Who knows, the Lord may open up another opportunity again for the Creation message to spread even further as we continue to focus on fulfilling the Great Commission!
Posted by Joseph Tan at 8:01 PM No comments:

An Amazing Gathering in Kuching! (9 March) 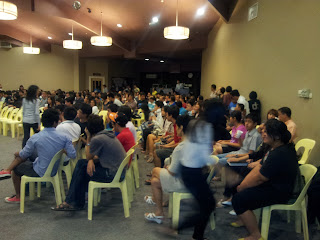 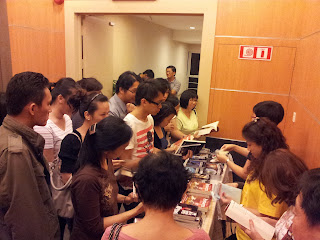 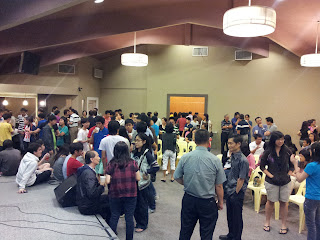 It never cease to amaze me how the Lord moves in gathering like-minded believers together! Sometimes when I feel that we are just the remaining "remnant", He surprises us by revealing to us that there are many more who are enthusiastic about a literal stand on Genesis. The Friday evening "Introduction to Creation Apologetics" seminar at Good News Fellowship, Kuching brought together the largest gathering thus far of a creation seminar which we have conducted to date. We are very grateful to the hard work and generosity of Pastor Jeff and his team at Good News Fellowship for putting this event together. Indeed, how blessed it is for brethren to dwell together in unity!
Initially, I was thinking - could 40kg worth of books and DVD - shipping them all the way to Kuching - would people really buy them? Again, the Lord surprise me and it was almost sold out save for a few copies! The hunger for the right Biblical worldview is real! When believers are equipped with the alternative to evolution, standing up for our faith in the absolute authority of Scripture becomes very exciting indeed! Here's a recent testimony from someone who attended the All-Asian Creation Conference last year:
"Since the conference, I have been on fire sharing this message tirelessly in churches, youth camps and among my clients overseas. It has been truly a blessing to myself and others around me.Thank you for bringing Ken Ham and his team to Malaysia. AIG has helped me to answer  the "missing link" and now I am so excited to have answers to all these difficult questions. It gives me a boldness in sharing the Gospel like never before. What a difference when you have answers!"
Posted by Joseph Tan at 12:29 AM No comments: 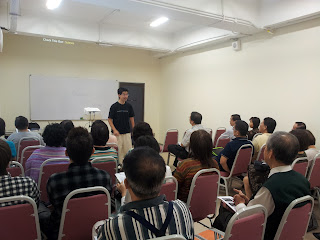 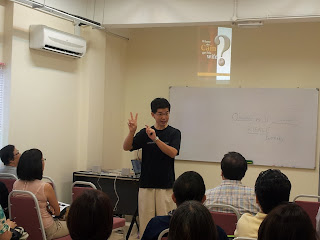 Had the second session of "Answering the Critics" at the School of Christian Growth (SCG) class at Subang Jaya AOG. Topic = "One Race" - answering the question on origins of races and people groups. The Biblical worldview of how we all from flow from Adam and Eve, later on through the dispersion at Babel makes more sense of the world we see around us. At the heart of evangelism is a calling to ALL people to return to their true family, to return to their true home, to their one and only Heavenly Father. That is why it is important for us to have an understanding that Adam and Eve, Noah and his family are all literal, historical figures used by God to eventually linked us with Jesus Christ so that there can be a real "family reunion". This is the ministry of reconciliation that God has entrusted to us (2 Cor 5:16-21).
Posted by Joseph Tan at 11:24 AM No comments: 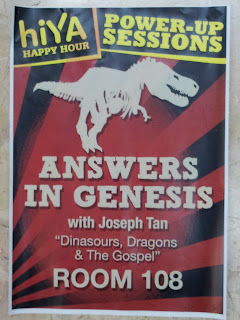 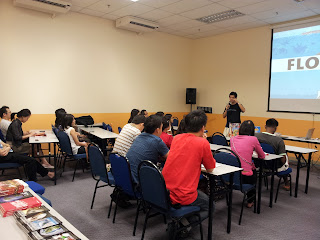 We had the privilege of being invited back again to the DUMC "HiYA" monthly fellowship event of the young adults. The first time we presented the topic of "Creation vs Evolution" and this time round it is "Dinosaurs, Dragons & the Gospel". Despite the heavy downpour, we are amazed with the turnout which almost took up all the seating space in the room!

The wonderful testimony came from a guy in his 20s who have had a fascination with dinosaurs since he was ten years old - constantly looking for answers in the Bible but found none. "Today, I have found the answers!" - was his joyous acclaim that now he can have an integrated worldview with the Scripture as his starting point. It is faith-building moments like this that make all the hard work worthwhile!
Posted by Joseph Tan at 2:39 PM No comments: 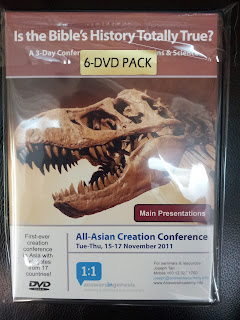 After months of editing (and re-editing) - thanks to Bugs and his team- the DVD and MP3 package of the first ever All-Asian Creation Conference held last November is now finally ready for shipment! It is a truckload of information presentation, workshops and interviews recorded on 6 DVDs! For those who have ordered, thank you so much for your patience in waiting - it is definitely worth the wait ... be on the lookout for a package in your mailbox soon. We praise the Lord for the many hands that have made this possible - especially to Debra (my wife) and her team of helpers, Luke for leading the AV team together with Silas and Bugs. Thank you!
Posted by Joseph Tan at 10:40 AM No comments: 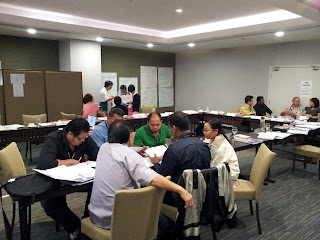 Was privileged to conduct a class on Goal-Setting for the Haggai Institute National Seminar at Premier Hotel, Klang. It is indeed refreshing to remind myself on the importance of redeeming the time and making sure the factor of "eternity" is considered in my Life Purpose Statement. Here's my Life Purpose Statement - As a disciple of Jesus Christ, I seek to invest in leading my own family to a Christ-centered abundant life and to demonstrate the power of the Gospel to the next generation - ensuring that my children's hearts are turned towards the Lord. I will contribute through teaching, speaking and writing. I seek to challenge leaders to address the character and faith gap of the next generation by engaging and equipping them with God-honoring thinking skills and a Biblical worldview.
Posted by Joseph Tan at 8:03 PM No comments: 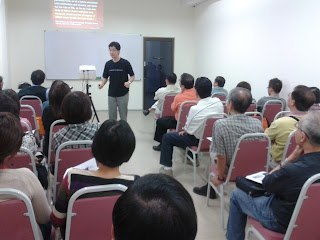 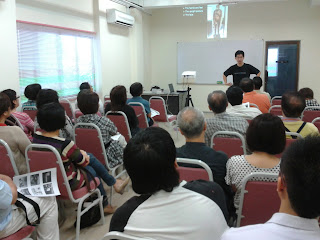 Last Sunday (Feb 26), we did Session One of "Answering the Critics" - as part of the SCG (School of Christian Growth) in Subang Jaya AOG. Focus was on the difference between Operational and Historical Science plus an introduction to the 7Cs of a Biblical Worldview. Was encouraged to see that there were parents who attended together with their teenagers - this is surely one way to build the faith of the next generation! Session Two will deal with One Race, the Flood & Dinosaurs.
Posted by Joseph Tan at 3:14 PM No comments: